Dear people,
Many of you are aware of Massimo Bacigalupo's important edition of Ezra Pound's Canti postumi, published by Mondadori a few years ago. It is our privilege this year to finally have an expanded and revised edition in English:
Posthumous Cantos published by Carcanet.
In case some of you are wondering, here is the most succinct explanation of this important work:

Drawing on notebooks, typescripts and periodicals, Posthumous Cantos is a selection of drafts and sketches for cantos that remained uncollected in Pound’s lifetime. The material spans the half-century of Pound’s canto-writing, from 1915 to the 1960s, including those he wrote in Italian in the 1940s, provided here in their original form alongside English translations. Accompanied by detailed introductory and explanatory notes, Posthumous Cantos offers new insight into the making of one of the twentieth century’s most important literary works, its reworkings, variations and excisions. This is a crucial part of the Pound canon, and the first time it has been made available in an English edition.

The official publication of the volume is scheduled for the end of October, to coincide with Pound's birthday.
HOWEVER
Carcanet is offering Ezra Pound Society members a discount on the book for the time until the official publication date, that is from today until the 28th of October.
If you are interested in the book and would like to purchase it:
Go to the website  http://www.carcanet.co.uk/cgi-bin/indexer?product=9781784101206
Give Rapallo as a code at check-out. 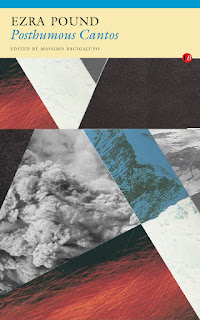 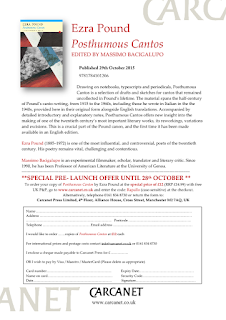